From the earliest days of tourism in the Blue Mountains, the Orphan Rock has been one of the 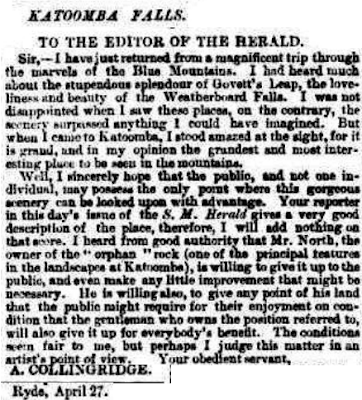 features people have most admired. Just when the name was first used is unclear; the title on a photo from 1879 calls it the “Orphan Tower” and in a letter to the Editor of the Sydney Morning Herald dated April 27th 1880, the writer refers to it as the “orphan” rock.

This same letter also raises the question of the ownership of the Orphan Rock. Clearly it was then part of the coal mine lands owned by John Britty North. When (if ever) did it pass back into public ownership or does it still belong to the Hammon family, owners of Scenic World today? I believe the person who possessed "the only point where this gorgeous scenery can be looked upon with advantage" was James Henry Neale MLA. The point referred to is presumably Reid's Plateau, which would have been included in the Reserve when it was proclaimed soon after. Not all landowners in the Blue Mountains have been so public-minded.


The walking track to the summit was built as part of the tourism attraction expansion of the 1930’s (which also saw the Prince Henry Cliff Walk and the Giant Stairway completed, among others). This track had a short life, however, due to concerns about the stability of the rock itself and it was closed in the 1950’s. I have been up there long ago, but whether this was a legal ascent or not I don’t remember. The 1958 photograph with the Skyway seems to show two figures standing at the lookout on the left hand side.
** See Philip Hammon's comment below on access to the Orphan Rock and ownership of the land.**

This quote from “The Land”, Friday 22nd 1937, tells the story well. It’s a shame we can’t enjoy the experience today.


“Time was when the rock was regarded as quite inaccessible, but by means of rope and hook and stout heart, one of the Council's rangers reached the top; as a result of that perilous climb, safely guarded steps have been hewn from the rock, and built of hardwood in places, whereby the top may be reached in safety. Once at the apex the climb will be found more than worth while; lookouts have been constructed, giving a clear view of the Falls on one side, while on the south the undulating valleys run away for illimitable miles in shades now blue, now mauve, now pink.”

It has often been pointed out that the Katoomba Falls area (which includes the Orphan Rock) was the centre of Katoomba tourism in the early days and that the Three Sisters and Echo Point only took over that position in the early twentieth century. One institution which still maintains the Rock as its logo is the Paragon Café in Katoomba St. As one writer put it, “Like this famous rock, the café stands alone”.

Here is a link to a description of a recent climb of the rock. I DO NOT recommend readers to do the same!


View my Blue Mountains videos on my You Tube site here.  I have three other playlists - gemhunting/geology, Glen Innes and New Zealand. Please comment and subscribe!

Posted by Geology and Blue Mountains Walks at 18:34