LINKS TO ALL BLOG ENTRIES AND RELEVANT VIDEOS 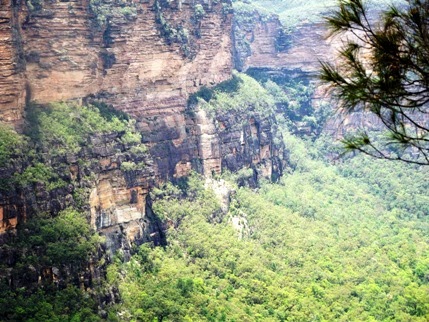 In the period 1880-1910, a maze of walking tracks and lookouts was developed in the Wentworth Falls Reserve under the supervision of a local group of trustees. They were determined to provide access to as many points of interest as possible and today’s tracks and lookouts are essentially those developed at that time.
The present day Undercliff and Overcliff Tracks meet at the bridge over Den Fenella Creek, a point easily reached from the western end of the Wentworth Falls Picnic Area. The National Parks and Wildlife Service has spent a lot of time and effort in rebuilding and restoring these historic tracks and it is only a few months since the Den Fenella track was reopened with many good improvements.


For information on Den Fenella and the Undercliff Track, see this blog entry. 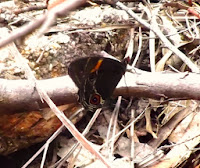 From the bridge over the creek the track ascends to Lady See’s Lookout, then to Breakfast Point Lookout. 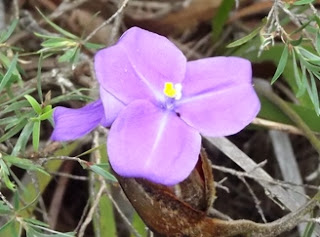 There is a link here to Murphy's Lane near the Conservation Hut. The Overcliff track continues to Lyre Bird Lookout, from which  another track ascends to the Short Cut Track. Close by is Queen Victoria Lookout, near the point where the descent into the Valley of the Waters begins. Otherwise, continue up the hill to the Conservation Hut (for a well earned break at the café) or return to the Picnic Area along the Short Cut Track.
Sir John and Lady See bought Yester Grange in Wentworth Falls in 1902 as their country residence. At that time Sir John was the Premier of New South Wales. Sadly, Lady See (born Charlotte Mary Matthews) died in March 1904. Sir John resigned soon after and died in 1907. The lookout was opened in 1904 at a ceremony attended by Sir John. It had previously been known as “Picnic Point”.
At the time of writing, the lookout was closed and in need of repair. It is to be hoped that the NP&WS will soon attend to this and the repair and upgrading of the entire Overcliff Track, which is in need of some serious maintenance work.

For the Wild Walks information on this walk click here.
For my video of this walk, click here. My Blue Mountains You Tube playlist is here . I have three other playlists - on gem hunting/mining, Glen Innes and New Zealand.

Posted by Geology and Blue Mountains Walks at 22:30 No comments: 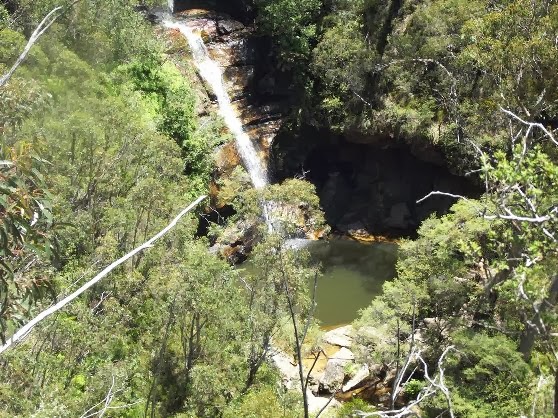 There are quite a few variations in the spelling of this attractive waterfall in North Katoomba. The one in the title is the correct one. 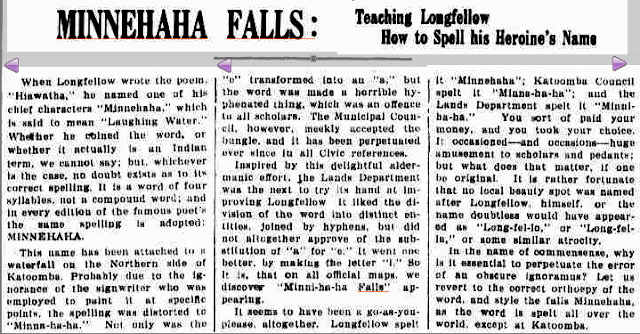 The article below is from  the "Blue Mountain Echo" of Tuesday 15th May 1928, page 2 (courtesy of Trove).
The line from Henry Wadsworth Longfellow’s poem “The Song of Hiawatha”, first published in 1845, reads as follows: “And he named her from the river, from the waterfall he named her, ‘Minnehaha, Laughing Water.’” If you would like to read the poem, which has a beautiful rhythm, you can download a copy here.         Now most of us would understand from that that the word Minnehaha means “laughing water”. Not so – in the Dakota language Minnehaha actually
means “water waterfall”. No, I’m not repeating myself, there are two “waters” (the haha part I suppose).

Now why our Katoomba waterfall has this name I don’t know. It has been called that since at least 1895. The original waterfall and river are in the US state of Minnesota and are somewhat grander than ours, though for sheer beauty of surroundings the Blue Mountains version scores pretty well.
One last complication is the fact that the creek which goes over Minnehaha Falls (our version) is Yosemite Creek. Yosemite Valley is in the state of California, a long way from Minnesota. 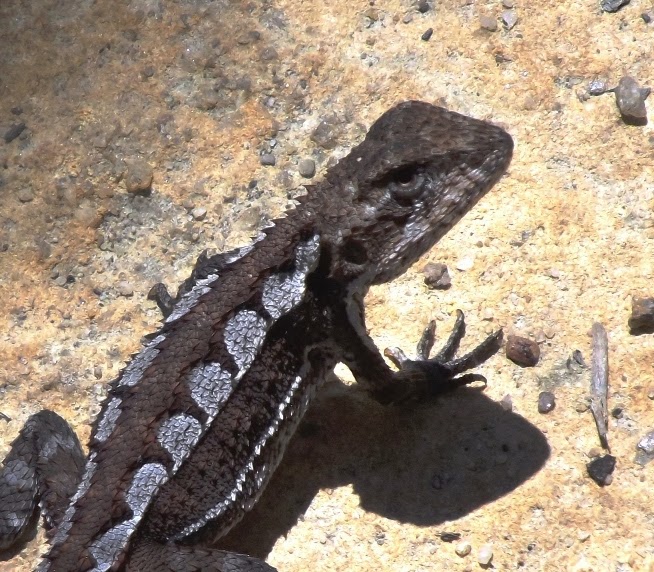 A major attraction of these falls is the plunge pool at the bottom. (A plunge pool is the term used for a pool gouged out in solid rock by a waterfall.) All the early guide books say it is “bottomless”, which simply means that no-one had succeeded in diving in and touching bottom. Whether they ever did or not I don’t know, but as the twentieth century rolled on and urban development increased in North Katoomba, the pool filled up with sand, which must have been a great disappointment for the people who liked to swim and dive in it. This state of affairs continued into the twenty first century and even the information board at the beginning of the track deplores this fact, though it holds out hope for a return to the former condition of the pool.
Well, it has happened! Just when I don’t know though I suspect it was a gradual process, greatly encouraged by the construction of sediment traps by the Blue Mountains City Council but particularly by violent thunderstorms during the summer of 2012/13. You can once more enjoy the best swimming hole in the Blue Mountains and appreciate the grandeur of the scenery at Minnehaha Falls.
My video of the walk is here. Two other videos (in which the pool is still heavily sanded) are here and here.
My Blue Mountains You Tube playlist is here . I have three other playlists - on gem hunting/mining, Glen Innes and New Zealand.

Posted by Geology and Blue Mountains Walks at 22:34 No comments:

LINKS TO ALL BLOG ENTRIES AND RELEVANT YOU TUBE VIDEOS 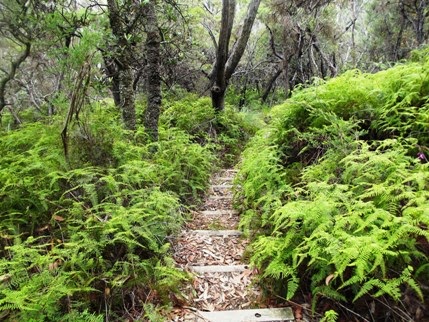 The walk to Inspiration Point is a comparatively easy one. Being in a quiet corner of Leura, you will probably not meet up with other walkers. The track is in good condition but the two lookouts at the track’s end are in their natural state – no guard rails, wire netting, handrails or whatever.
The name “Inspiration Point” is a common one in scenic areas around the world. In fact there is another one on the road to Jenolan Caves. There is nothing commonplace about Leura’s Inspiration Point, however. The older references, both newspapers and guide books give no indication about how or by whom the place was named.
Attention was drawn to the area in the 1880’s when the Gladstone Colliery was opened in the valley below with great fanfare. Heaps of money was spent in developing the mine, putting in an aerial ropeway and constructing a coal loading area on the railway between Leura and Wentworth Falls. You can read about it in newspapers of the day, the Sydney Morning Herald of 13th July 1885 being typical. ( See Trove here for a list of references.) . Despite all the hype, the whole operation soon folded and about all you will see today is some rusty metal, odd bits of coal and the miner’s path down Gladstone Pass into the valley. 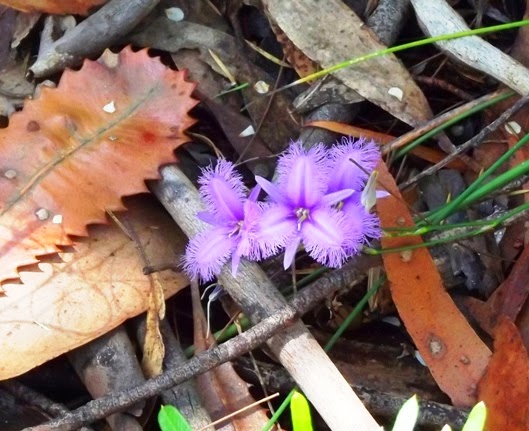 Our track to Inspiration Point does not go near Gladstone Pass, however you will see the track to Roberts Pass near Moya Point lookout. This track descends steeply into the valley below, with the left track at the bottom connecting to the Vera Falls track in the Valley of the Waters and the right track becoming Lindeman Pass which leads below the cliffs ultimately joining the Federal Pass near Leura Falls. These tracks should not be taken by inexperienced or
under-equipped hikers. Many have become lost and some have died in the attempt.

Stay safe and remain on top. The Moya Point lookout reveals a frontal view of both drops of Wentworth Falls, from a considerable distance of course. Gladstone Lookout provides a great view of the cliffs towards Sublime Point. When you stand there and look below, think of the coal miners who had to descend those gullies daily, probably carrying their tools, to work in the confines of a low, damp and dangerous mine. I don’t think there would be many takers for such a job today.
The Wild Walks information on this area may be found here. My video of the walk may be found here. My Blue Mountains You Tube playlist is here . I have three other playlists - on gem hunting/mining, Glen Innes and New Zealand. Please comment and subscribe.

Posted by Geology and Blue Mountains Walks at 02:27 No comments: 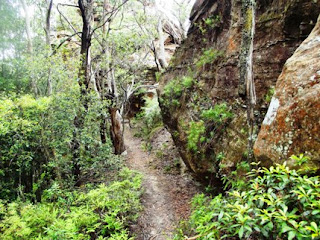 The first stage of the Prince Henry Cliff Walk was opened at Echo Point in October 1934 by the Hon ES Spooner, Minister for Local Government in the NSW parliament. This covered the section from Katoomba Falls to Echo Point.
It took some time for the second stage to be completed. It was necessary for the Katoomba Council to acquire land in various places without which the track would have been rather too close to houses. It still is in the last sections approaching Gordon Falls. It was here, at Elysian Rock lookout, that Hon EA Buttenshaw, Minister for Lands, officially opened the section from Echo Point to Gordon Falls. Buttenshaw Bridge at this spot is named after
him.

Between Carrington Park and Leura Cascades there are 7 named lookouts, each with its own special features. All but one of these is relatively close to the walk. The exception is Copeland’s Lookout, which is approached by a 5-10 minute walk out to a point of land far enough away from the comparatively busy Cliff Walk to make it a very peaceful spot. The lookout is surrounded by a rock wall, similar to some at Wentworth Falls.
William Copeland opened one of the first stores in Katoomba and went on to serve on the local council and in many other civic capacities. He died in 1928. Just when the lookout was named after him is uncertain, but like many of the view points along the Prince Henry Cliff Walk, it was probably before 1900.
Along the track to Copeland’s Lookout are numerous graffiti dating back a 100 hundred years or more. I certainly don’t advocate defacing the environment in this way, but it is true that they can be very interesting and occasionally historically important. Two in particular stand out and neither is all that conspicuous, though when they were fresh they probably were.
The first is a painted inscription on a flat section of rock largely protected from the weather. It says, with simple assurance, “GOD LOVES ME”. The second is more complex. Keith Painter refers to it in his excellent booklet on the Prince Henry Cliff 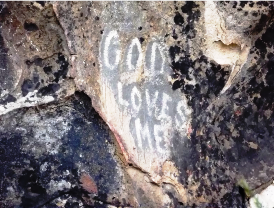 Walk on page 33. (You can purchase a copy of this and Keith’s other books from Mountain Mist Books here.)

The inscription reads: “TRIX CHEERS 20.9.14 C.E.ABBOTT”. Keith then comments “I wonder if Trix and C.E. survived the war?”
We can now say beyond a doubt that they did! We know from the Sydney Morning Herald, Saturday 18th December 1915, page 12, that Clarence Edwin Abbott married Beatrice Cheers at St John’s Church Darlinghurst. Furthermore, the Herald announced their Silver Wedding anniversary on Wednesday 13th, 1940, page 10. Clarence died in 1956 aged 69 and Trix in 1972.

Several Wild Walks information sheets relate to this track. You will find an index here.
My video of this walk is here while that of the Carrington Park to Echo Point walk is here. You will find my Blue Mountains You Tube playlist here , I have three other playlists - on gem hunting/mining, Glen Innes and New Zealand.

Posted by Geology and Blue Mountains Walks at 21:14 No comments: