LINKS TO ALL BLOG ENTRIES AND RELEVANT YOU TUBE VIDEOS
Of all the photographers who set up business in the Blue Mountains of NSW, none has left a legacy to compare with that of Harry Phillips.
He was born in Ballarat, Victoria, in 1873 and settled in Katoomba with his family in 1908. He had previously been a printer machinist with an interest in photography. He must have sensed that there was a great demand for postcards and view folders, because he quickly entered the field both as a photographer and printer.
Over the years he produced vast numbers of postcards and view books but making money was not the driving force behind him. He was an enthusiastic promoter of the Blue Mountains and a
search through the newspapers of the day will reveal his unrelenting pressure on the local council to attract more visitors and to look after them better.

Watch the slide show I have put together to illustrate his work. (here) These photographs show that Phillips wanted the most dramatic and stimulating views he could get . Some of these pictures reappeared in postcards and view books over and over again. I’m certain he would have replaced them with better ones if
he had been able to take them.

His 80+ known view books include places well beyond the Mountains, but the majority are of “home”.
When he died in 1944, apart from a simple newspaper notice in the Sydney Morning Herald classifieds (repeated in the local Katoomba paper) there were no verbose obituaries to honour him. We’ll excuse the residents of the Blue Mountains for this lapse on the grounds that there was a war on at the time.

To view or download copies of the three works available through Trove, firstly go to the website (here) and select the category “Books”. The three titles to use in the search box (one at a time, of course) are: Historic Blue Mountains, Blue Mountains Gems, and Jenolan Caves Phillips. When the work appears, you will find instructions on how to download a copy for your private reference. 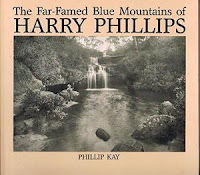 There is also the book by Phillip Kay titled “The Far-Famed Blue Mountains of Harry Phillips” (1985). You can try Megalong Books of Leura (here) or Lamdha Books of Wentworth Falls (here) for a copy.

Posted by Geology and Blue Mountains Walks at 19:42 No comments:

DOWNLOADING A 1955 BOOKLET: THE STORY OF MT WILSON IN THE BLUE MOUNTAINS


LINKS TO ALL BLOGS AND VIDEOS 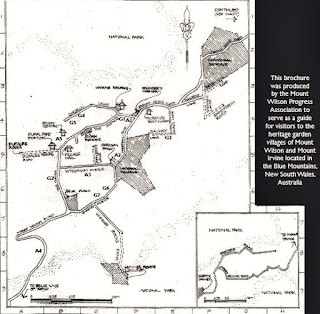 If you haven’t visited Mt Wilson yet, this 1955 tourist booklet will make you want to! You can download it from Trove here. If you have trouble finding it, try a search in the “Books” category, using “The Story of Mt Wilson in the Blue Mountains” in the search box, then following the prompts. The link to Trove is here.
The map of Mt Wilson shown is taken from the current Mt Wilson Website (here). You will be able to make more sense of the 1955 book if you have the modern information and map to locate many of the places mentioned.
Mt Wilson is a very special place, being a fertile, elevated piece of land in the sandstone wilderness of Wollemi National Park. I have made several videos and blogs on Mt Wilson already and I am hoping to do more.
Here is a list:
The Waterfall Track here.
Wynne’s Rocks and Du Faur’s Rocks Lookouts here.
The Cathedral Reserve here.
Blog: The Geology of Mt Wilson here.
I’ve also made a slide show using the illustrations from The Story of Mt Wilson (here).

Posted by Geology and Blue Mountains Walks at 04:08 No comments:


LIST OF ALL BLOGS AND RELEVANT VIDEOS
Both spellings have been used over the years, so I’ve used both in this Blog!
Located on the western side of Katoomba, Nelly’s Glen provides a way into the Megalong Valley from the plateau. It was no doubt used by indigenous people as one of their many routes up the barrier of sandstone which surrounds all the Blue Mountains valleys. When coal and kerosene shale mining became profitable enterprises (around 1870), the Glen provided one of the safest routes up to the railway and the western road. All this happened before the establishment of the township of Katoomba.
The expansion of mining under the leadership of John Britty North (1879/80) and the subsequent growth of Katoomba led to the Glen being visited by a growing number of visitors (tourists, we would say). The first reference in print to the name “Nellie’s Glen” that I have found is in a real estate advertisement for the sale of subdivided land owned by JB North, in the Sydney Morning Herald, Saturday 25th August 1883. The Glen appears to have been named for one of North’s daughters.
The growth of tourist numbers to Jenolan Caves led to the construction of a bridle track linking it with Katoomba. These were the days when horses were indispensable in moving people around. The Tarana and Mt Victoria routes were the most commonly used and it was becoming clear that the Mt Victoria route via Hartley and the present Jenolan Caves road was superior and that this would lead to more and more tourists using Mt Victoria as a base.
A glance at any map will show that, as the crow flies, Katoomba is the closest mountain town to the Caves. However, the valley of Cox’s River lies in between, making it unlikely that a road for wheeled vehicles could be built to the Caves that way.
The entrepreneurial leaders of the Katoomba community saw that a bridle track, descending into the valley via Nelly’s Glen, could provide a way of drawing visitors to Katoomba. This was the origin of today’s “Six Foot Track”, which is now used by pedestrian traffic only.

A report and rough survey was commissioned by the NSW government in 1884. We are fortunate that Mr WM Cooper (described as “Surveyor of Public Parks”) wrote a report in 1885 titled “Track from Katoomba to Jenolan Caves”. You can download a copy from Trove here. Cooper does not use the name Nelly’s Glen, referring only to “Megalong Cleft”, which I understand to mean the narrow gap in the cliffs where today’s steps lead down into the valley below. “Nelly’s Glen” includes the Cleft and the widening valley below it where Megalong Creek runs down to join Cox’s River, though where the Glen becomes Megalong Valley I can’t say.
The track was quickly constructed and soon in use by those looking for an adventurous route to the Caves. The name “Six Foot Track” was given later because it was constructed wide enough for two horses to pass without requiring a rider to dismount. The illustrations shown here are of the section immediately below the cliff line, in the vicinity of Ethel Waterfall. Naturally most of the route was not constructed to this standard. The main descent down the Cleft was built as a zig zag to lessen the grade. Nearly all of this track was destroyed by the ravages of time and the misguided attempt by the Blue Mountains City Council to construct a fire road down the Glen in the 1960’s.
More recently, the entire Six Foot Track route was reconstructed and has become a very popular walking (and running) track. Where the zig zag track descended through Megalong Cleft there are now hundreds of well-made steps. If you are planning to visit the place, make sure it’s not at
the same time as one of the running events which bring crowds of athletes pounding up and down the steps. To me, such activities are akin to staging a race through a public library or a cathedral. They have no place in what should be the peace and quiet of our National Parks and reserves.

More reading material: From Katoomba to Jenolan Caves The Six Foot Track, 1884-1984 by Jim Smith. You can try Megalong Books in Leura or Lamdha Books in Wentworth Falls for a copy.
Bush walking guides: WildWalks - Nelly's Glen Lookout (here), Nellies Glen and the Devil's Hole (here).
Tourist Sketch Map Showing Paths at Nelly’s Glen or Megalong Pass 1909 (here). If you look carefully you will see that there are 2 tracks shown into Megalong Cleft – the present route and another which appears to descend the cliffs from the Bonnie Doon track network (which has mostly been lost over the years).
My videos:Nelly's Glen Katoomba (here), Explorers Tree to Bonnie Doon (here), Bonnie Doon Track (here).

Posted by Geology and Blue Mountains Walks at 23:22 1 comment: