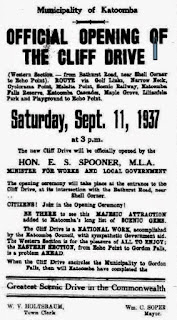 The word cyclorama comes from the theatre, where it refers to the backdrop at the back of a stage, in front of which the action takes place. Its use for this lookout no doubt refers to the extensive view around the horizon, with the Jamison Valley, Narrow Neck and Mt Solitary making up the “foreground”. 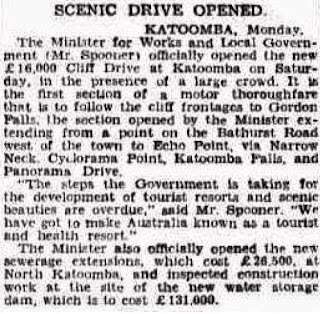 That’s what you would have seen had you gone there in 1936, when the Bathurst Road – Echo Point section of the new Cliff Drive was officially opened. Today the view is largely obstructed by trees and whatever appeal the lookout might once have had has now been lost. Few visit the place these days yet the tracks to it can be clearly seen from the road and are well signposted. 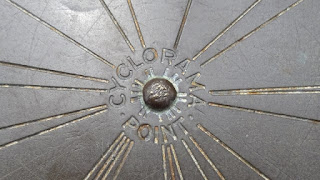 This has led to the preservation of the lookout more or less as it was when the work was completed in 1936, one of the few places in the Mountains where modernisation has not yet reached. Even the brass direction indicator remains intact. These were once plentiful but vandals and thieves have destroyed most of them.
I have been unable to find any older photographs of Cyclorama Point and even published references to it are few, apart from those referring to the new Cliff Drive and later listings of tourist attractions. 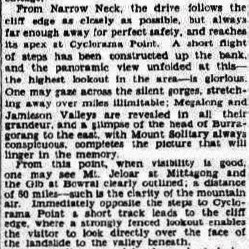 The nearby Landslide Lookout is right on the edge of the cliff, immediately above the 1931 landslide. You can’t see the landslide from the lookout, however. It’s worth visiting both lookouts when you visit, but there’s only enough parking for a few cars on each side of Cliff Drive.
View my video on these lookouts here:
The newspaper extracts can easily be found in the digitised newspaper files in Trove here. The satellite image is from Google Earth. The landslide and lookout is on the left; Cyclorama Point is in the centre. 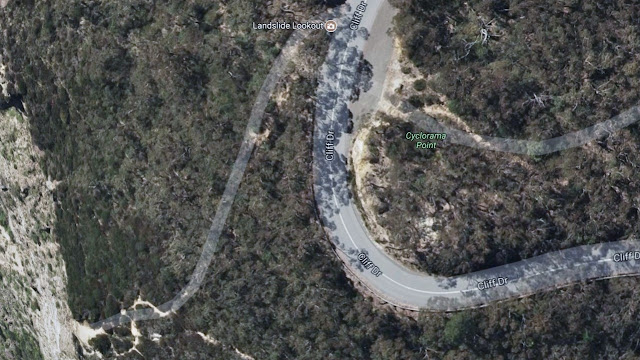 Posted by Geology and Blue Mountains Walks at 23:34 No comments:

The name “Melvin Vaniman” is hardly well known today, yet in 1903 the opposite was true.
I’ve been familiar with Vaniman’s Lookout at Katoomba for the past 60 years but until we came to live at Lithgow I assumed that Vaniman was a local dignitary or politician of some sort. The first inkling that this was not the case came when I read that he was an American photographer who visited the Blue Mountains in the early years of the 20th century.
He certainly was that, but perhaps “American adventurer” would be a better description. Here are a few lines from Wikipedia (here) used to describe him. “Chester Melvin Vaniman (1866 – 1912) was an American photographer, adventurer and businessman who specialized in panoramic images taken from height and was nicknamed the "Acrobatic Photographer." Other descriptions refer to him as a competent opera singer and a pioneer aviator.
It was in this latter role that his life ended in a fiery accident in which the hydrogen-filled airship “Akron” caught fire and crashed on July 2nd 1912. It had been intended to use the craft in an attempt to be the first to fly across the Atlantic Ocean.
Vaniman’s association with the Blue
Mountains occurred in November 1903. He was engaged in taking large photographs of interesting places around the world. When I say “large”, imagine a glass photographic plate “48 by 16 inches and embracing a panorama of over 190 degrees” (Mountaineer (Katoomba, NSW : 1894 - 1908), Friday 27 November 1903, page 3) according to Trove (reference here).
The article goes on to say “Some idea of the vastness of the panorama can be obtained when we explain that a picture was obtained of Katoomba Falls and the surroundings, which takes in the top Lookout, the Falls, the Three Sisters, the Broken Wall, Mount Solitary and round to the Orphan Rock.” I believe that this particular photograph was taken from what we now know as “Vaniman’s Lookout”, which had acquired this name by 1905. I have yet to find any other mention of such a photograph.
The photograph which the Mountaineer article was mostly interested in is the one shown below, taken from atop a pole 80 feet high near Gearin’s Hotel, which can be seen in the right foreground.

I read somewhere that a copy of this photograph had been purchased by the Katoomba Council and was to be displayed in a public building in the town. Where is it now?
The pictures illustrating this blog show the typical development of a mountain lookout. (Thank you to the photographers and the current owners of these). At first, the railings were made of locally cut poles. Later these were replaced by steel posts and chicken wire. More recently came the sturdy structures seen in the present day throughout the area. Presumably in the near future there will be more of the fencing currently seen around Katoomba Cascades – effective, but not as photogenic as the earlier fences were. Missing today is the bench on which to sit and marvel at the scenery.

See also my YouTube videos and Blogs:
The Round Walk Katoomba Falls Blog: here
The Round Walk: here
Lookouts at Katoomba (1) here
Posted by Geology and Blue Mountains Walks at 03:27 No comments: