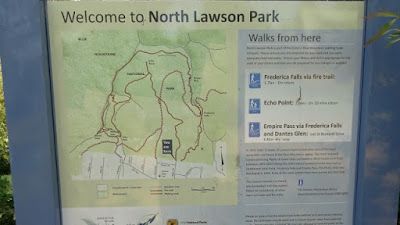 North Lawson Park (on the northern side of the railway line at Lawson) has a long history extending back to the late 1870’s, when most of what we now know as Katoomba and Leura were only just being explored. It would be useful at this stage to check out my video on Dante’s Glen (here) and the blog which goes with it (here). There are many links in the blog to sites which will help you understand the place better.
The construction of walking tracks, steps, shelter sheds and all that goes with getting the public to visit these beauty spots was not just a matter of local pride but of economics. The upper mountain communities (Wentworth Falls, Leura, Katoomba,
Blackheath and Mt Victoria) were all after the tourists’ pounds as well. They had grander scenery, higher elevation and in particular round walks, where walkers didn’t need to retrace their steps. The Rodriguez, Federal and National Pass were, and still are, hard to beat for a great day’s walking. The Empire Pass at Lawson was Lawson’s attempt to capture more of this market. 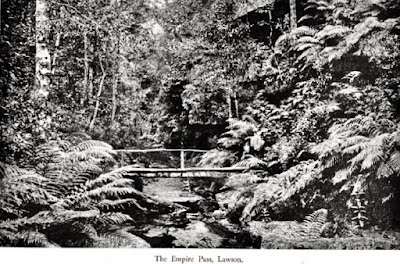 We need to remember that, in those early stages of development, most of the money and labour required was donated by the local community. They did a remarkably fine job with very limited resources and we should honour the pioneer track designers and builders for the amazing things they achieved. At North Lawson Park, the main attractions lay on the western and eastern sides –Dante’s Glen and Fairy Falls on the one and Frederica Falls on the other. The “pass” (probably named to make it seem more impressive than it actually is) was constructed to join these two areas. It was 30 years after the initial track work in Dante’s Glen before the Pass was completed in October 1910. We don’t know who named it, but patriotism and loyalty to the British Empire was the order of the day and the 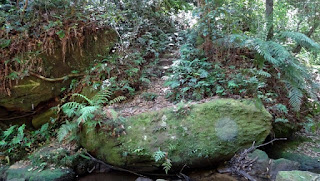 appeal would be the same 4 years later when the Great War broke out in Europe – for God, the King and the Empire. You only have to look at coins of the day (King Edward VII, 1910) to see the inscription (in Latin, of course) “DEI:GRA:BRITT:OMN:REX:FID:DEF:IND:IMP”, which reads in English “By the Grace of God, King of all the British people, Defender of the Faith, Emperor of India”. Most of that continued in use on Australian coins until 1966.


The people of Lawson were justly proud of their achievement. They not only constructed hundreds of stone steps, but put up sign posts in many places, built fire places and erected shelter sheds (at least 5 of them). Nothing remains today except the steps (and the seat at Lucy’s Glen, which I missed seeing this time) – and they blend perfectly into what is a beautiful environment, worth preserving for all time. 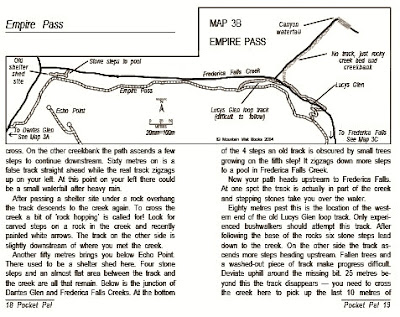 May I recommend Keith Painter’s Pocket Pal series of booklets (the relevant one being “North and South Lawson Walks”), which you can order from Mountain Mist Books (here). An extract appears opposite. A heritage study by the NSW Department of the Environment (here) contains lots of valuable information.
I’ll conclude with a little about Frederica Falls, which has given its name to the creek which the Pass follows for most of its length. Frederica was the eldest child of local pioneers Benjamin and Alice Roberts (born April 25, 1882). 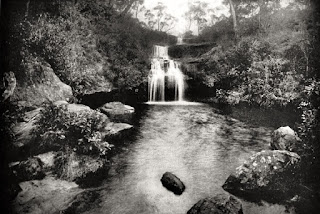 Her birth name was “Effie Alice Frederica Chilvers Roberts”; Frederica was what she was actually called. It seems that the land where the waterfall is located was owned by Benjamin Roberts at that time and the name was in use soon after her birth. This information comes from a biography of Roberts by Brian Fox in the Blue Mountains History Journal for October 2013 beginning on page 68. (Here). It may not be a great waterfall, but it is a great story.
My Blue Mountains You Tube playlist is here. I have three other playlists - on gem hunting/mining, Glen Innes and New Zealand.

Posted by Geology and Blue Mountains Walks at 19:30 No comments:


LIST OF ALL BLOG ENTRIES AND RELEVANT YOU TUBE VIDEOS 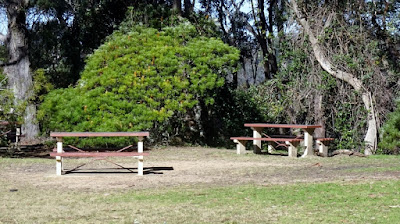 The picnic area at Gordon Falls, Leura, is a great base for exploring some of the best tracks the Blue Mountains has to offer. It’s a stopping place for the buses which do the Katoomba-Leura circuit many times every day so you can easily get there from Katoomba or Leura railway stations, do a walk and then move on to other places like Echo Point and Scenic World.
I suggest you view my earlier video about Gordon Falls Reserve here and the blog here. There many other videos and blogs dealing with the area. These are listed below.
My recent video on walking tracks at Gordon Falls Reserve is here. 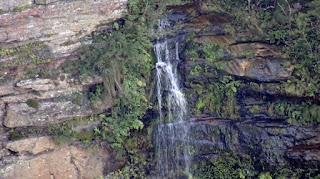 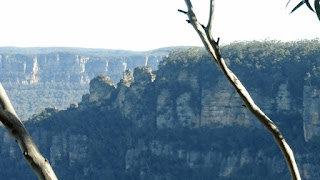 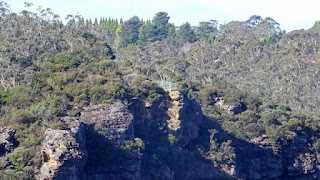 My Blue Mountains You Tube playlist is here. I have three other playlists - on gem hunting/mining, Glen Innes and New Zealand.

Posted by Geology and Blue Mountains Walks at 16:48 No comments:


LIST OF ALL BLOG ENTRIES AND RELEVANT YOU TUBE VIDEOS
The Scenic Railway at Katoomba was often called “The Mountain Devil” when I was young. This was 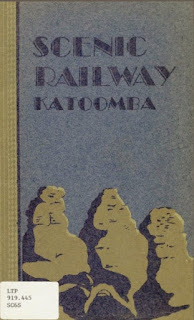 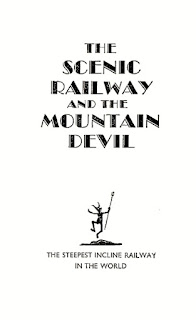 before the Skyway and more recently the Cableway were added to the present Scenic World complex. The connection is that visitors to the Blue Mountains often bought (or made) little horned figures out of the hard fruits of the honey flower (Lambertia) which is plentiful in the upper mountains. You will notice the “devil” images in the book and the name on the side of the carriage in photographs.

It’s not my intention to write a history of the place – others have already done a great job of that. I’ll let this little book tell the story itself, which is why you need to download a copy. According to “Trove” (the National Library of Australia’s online search facility), this publication is out of copyright so you are free to download a copy for your own use. The link with Trove is here. Go to the bottom of the page which loads up and click on the download link there. It begins with “View at …”. 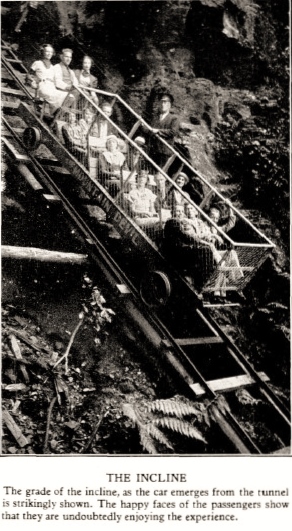 At the time of publication the operation of the Scenic Railway was still under the control of the Katoomba Colliery Limited; subsequently the whole site was bought by the Hammon family and developed into the world class tourist attraction it is today. For more information on the origins of the present day Scenic World, see “The Burning Mists of Time” written by Philip J Pells and Philip J Hammon (2009). The book has its own website here.
My video which accompanies this blog is here. It contains more photographs from the Scenic Railway booklet.
Here is a list of some of my videos and blogs (with links) which make reference to Scenic World:
Videos
To the Bottom of the Scenic Railway Via Furber Steps 21st November 2015
Katoomba Falls Walking Tracks 25th June 2015
Katoomba Holiday Part 1 15th May 2015
Cascade St to Katoomba Falls Reserve 17th January 2015
The Cableway Scenic World 16th December 2014
The Rainforest Walkway Scenic World 10th December 2014 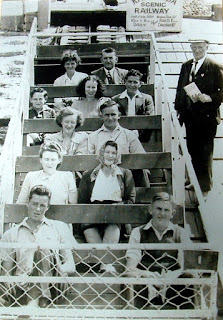 My Blue Mountains You Tube playlist may be found here. I have three other playlists - on gem hunting/mining, Glen Innes and New Zealand.

Posted by Geology and Blue Mountains Walks at 23:20 No comments: