LIST OF ALL BLOG ENTRIES AND RELEVANT YOU TUBE VIDEOS 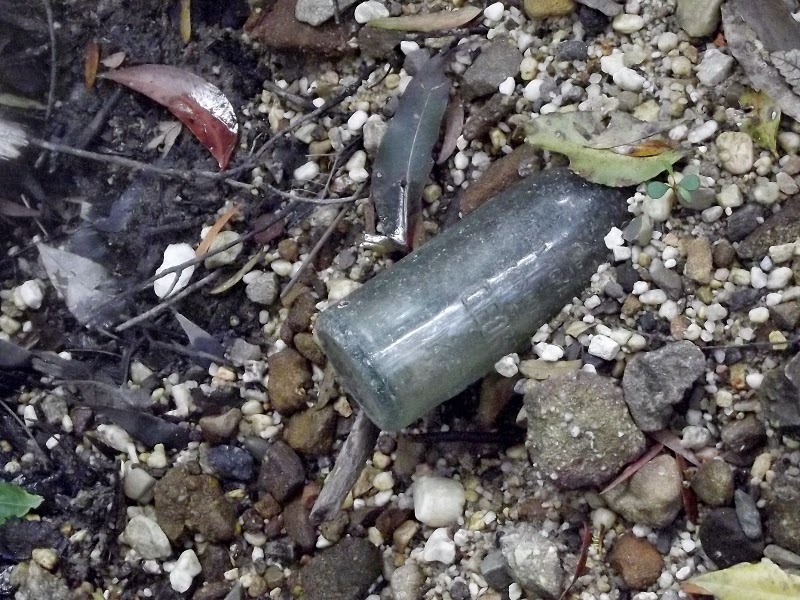 Some of you might recall that I found a broken soft drink bottle while on a walk at Lawson a few months ago. (The video may be found here.) The complete wording on the bottle is “2D deposit charged which is refunded on return. This bottle is the property of GEORGE  DAVIES & Co KATOOMBA”. The wording is unusual in that it shows the deposit as tuppence (twopence) instead of the more usual penny. When I was a lad it had gone up to thrippence (threepence). The reason for the 2D deposit would surely have been the great loss of bottles that cordial makers in the Blue Mountains suffered from nonreturns. Just like today, it seems to be harder to carry home an empty bottle than to bring out a full one. Bring back deposits and make it a dollar at least. I could use some extra cash! 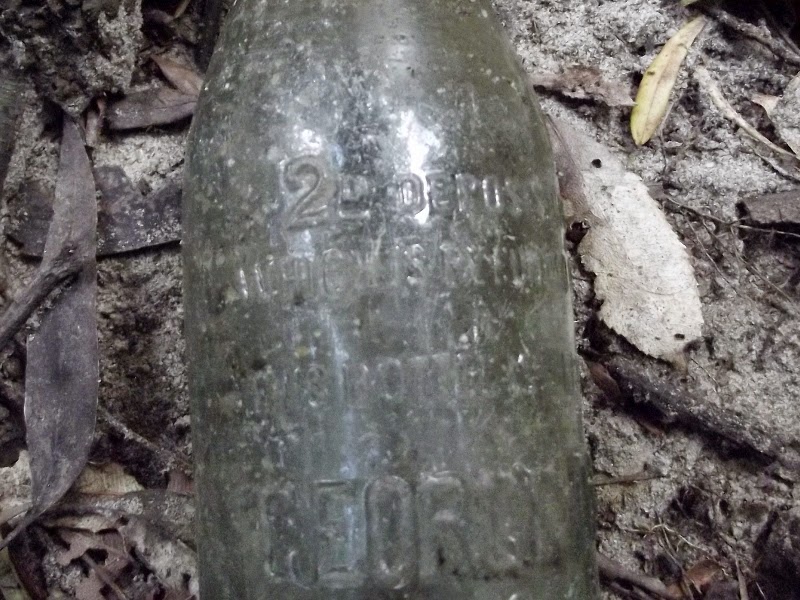 The only other marking is AGM on the base, denoting the Australian Glass Manufacturers company (Sydney). This style is found on bottles from around 1920/25.
Although it is missing, no doubt the bottle had a machine made crown seal top. I’ve seen other examples of this and similar bottles from the company including the 26 ounce (oz) variety. My example is a 13 oz one; there may be an even smaller 7 oz. There is also a crown seal stone ginger beer and more than likely a much larger stoneware demijohn, soda syphons and possibly 7 oz crown seal soda waters and amber glass ginger beers. The company came into existence too late to have used the older marble bottles, torpedos etc., though they may have been used some of Rowlands bottles with paper labels until their own were ready.
In those days every town had one or more soft drink factories (always called cordial works then) and it is a great field for collectors to acquire specimens and gather information about the makers. In addition to the main centre of Katoomba, there were also cordial works in Blackheath and Leura and possibly Lawson and Springwood.

I haven’t researched the subject in any detail yet, but the names of Bronger and E Rowlands stand out. The firm of Bronger Bros (EW and RJ) was established in Penrith around 1892 when they took over an existing business. The bottles from this firm show a pair of shaking hands as their trademark, no doubt a play on the word “cordial”. RJ Bronger moved to Katoomba in 1895 to establish a cordial factory. This was on the corner of Murri and Kundibar Streets and was subsequently converted into a modern ice works in 1919/20, the water supply being drawn from a deep well on the site. The operator of the ice works was WT Davies (son of George Davies).
The firm of E Rowlands had a long record going back to the gold rush days in Ballarat, where Evan Rowlands began a cordial works in 1854. The business expanded to Melbourne, Sydney and Katoomba. Many of their bottles bear the celebrated "Miner and Farmer” trade mark, though not the Katoomba ones, so far as I know. The connection with Katoomba began in 1888, when land was purchased from which large quantities of pure water were drawn. The water was despatched to Sydney for use in the factory there, later a cordial works was established on the site in Katoomba. This was in Bent St and presumably the famous “Katoomba Spring” must have been there too. We know for certain that George Davies and Co bought the E Rowlands business in 1920 and that RJ Bronger was an employee of the Rowlands business in 1906, when he lost an eye due to an exploding bottle. Presumably RJ Bronger had ceased making his own aerated waters and went to work for Rowlands some time before.

To get back to George Davies. He appears to have been a coal miner in the early days of Katoomba before becoming a successful butcher, in which trade he continued for the next 40 years. He was Mayor of Katoomba five times and always concerned for the future of his town. Most significantly, from the point of view of this Blog, he was not a cordial maker. It appears that the company “George Davies & Co” was established to provide employment for his son WT Davies on his return from the Great War. We know a lot less about William than his father, George. Something seems to have happened to the ice and cordial businesses after George’s death in September 1923. William’s name vanishes from the advertising after May 1924 and George Davies Junior’s name appears from October that year. No more ads can be traced for the Ice Works after November 1924. As for the aerated waters business, the last advertisement in the “Blue Mountain Echo” appears to be 16th October 1925 when the firm was looking for a “smart boy, about 16, to work in aerated water factory”. There is an ad in “The Mountaineer” tourist guide for 1927, but this publication was notoriously out of date.
You might say that this is just a taste of the George Davies story. You can find further information on these sites using Trove (here) :
The Ice Works The Blue Mountain Echo, Friday 23 January 1920, p 4
The E Rowlands Takeover The Blue Mountain Echo, Friday 19 November 1920, p 2
George Davies obituary The Blue Mountain Echo, Friday 14 September 1923, p 5
My Blue Mountains You Tube playlist may be found here. I have three other playlists - on gem hunting/fossicking, Glen Innes and New Zealand.


https://johnsbluemountainsblog.blogspot.com/2013/12/links-to-all-blog-entries-and-relevant.html All Blue Mountains blogs and videos
https://johnsnewenglandminerals.blogspot.com/2013/12/list-of-all-blog-entries-to-date.html
All New England and other Geology blogs and videos
Posted by Geology and Blue Mountains Walks at 15:10 2 comments:

LIST OF ALL BLOG ENTRIES AND RELEVANT YOU TUBE VIDEOS

It’s not hard to see why a railway dam was constructed at the place we now know as Wentworth Falls. By that, I mean the township, not the waterfall. It is the only place between Glenbrook and Bell where the railway line actually crosses a watercourse.
The 1813 exploration led by Blaxland, Lawson and Wentworth successfully crossed the Blue Mountains because they stuck to the principle of following the ridgelines as they moved generally westward from the Nepean River at Emu Plains. When the expedition reached the cliff edge overlooking what we now know as the Jamison Valley at Wentworth Falls, they ran out of a ridgeline to follow. Turning north and keeping the watercourse we know as Jamison Creek on their left, they eventually reached its head and resumed following the main ridgeline again.
George Evans evidently crossed this creek when he retraced their route later that year, according to the plaque in the reserve beside the lake. However, William Cox and his roadmaking team stuck with Blaxland’s track in 1814/15 and headed the creek. He set up a depot near the creek which became known as the Weatherboard Hut, from his note on the map of the road to Bathurst. This appears to have been on the eastern side of the creek near the bridge over the railway line. 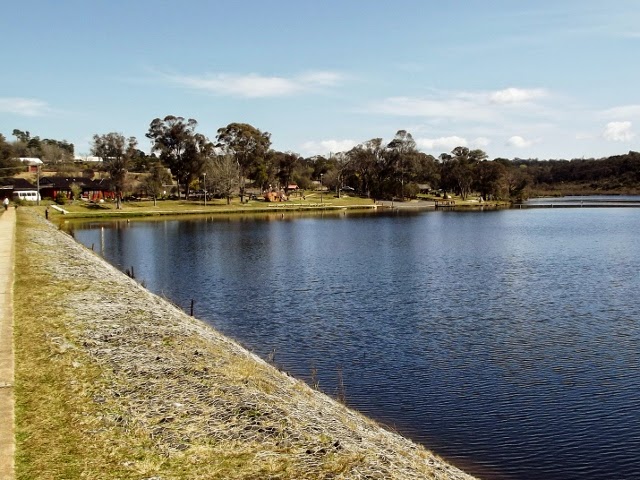 As soon as accurate maps began to be made by surveyors, it became clear that the road could be shortened by several miles by crossing the creek instead of going around its head. Just when this happened I don’t know, but you can be sure that Surveyor-General Thomas Mitchell would have insisted on this route when the road to Bathurst was being reconstructed in the 1830’s. Charles Darwin stayed at the Weatherboard Inn on the western side of the creek in 1836 and the inn had been there for several years by then.
The railway builders of the mid 1860’s naturally followed the same ridgeline as the road and so the railway crossed Jamison Creek just where it does today. Steam engines need prodigious amounts of water and there are few places on the Blue Mountains Line where it can easily be obtained. Weatherboard (as the locality was then called) became the first railhead on 11th July, 1867 as the tracks pushed westward. So far as I can tell, the first railway dam was built at Lawson (then Blue Mountain) in that year. It wasn’t very adequate even if Blue Mountain was a good place for a watering stop. The supply at Lawson was augmented by larger dams in the valley to the north, the last of these being the ancestor of the Olympic Pool in Wilson Park.


The line was soon extended to Mt Victoria, this extension being opened on 1st May 1868. The chosen spot for watering engines in the upper mountains was Blackheath, originally intended as the temporary terminus. Water was pumped from dams across Pope’s Glen Creek and, as in Lawson, their descendants became swimming holes. The upper one gave rise to today’s beautiful pool in Blackheath’s Memorial Park; the lower dam becoming the duck pond. The water supply from this source eventually became inadequate and a replacement dam was built on Govett’s Leap Brook.
Further dams were needed as the next section of line was constructed, the line descending via the Great Zig Zag into Lithgow’s Valley to the new railhead at Bowenfels. This section was opened on 18th
October 1869. I believe these dams were at Clarence and Zig Zag.
Another dam on Dargan’s Creek (Newnes’ Junction) was needed to service engines on the Newnes branch line some time later. 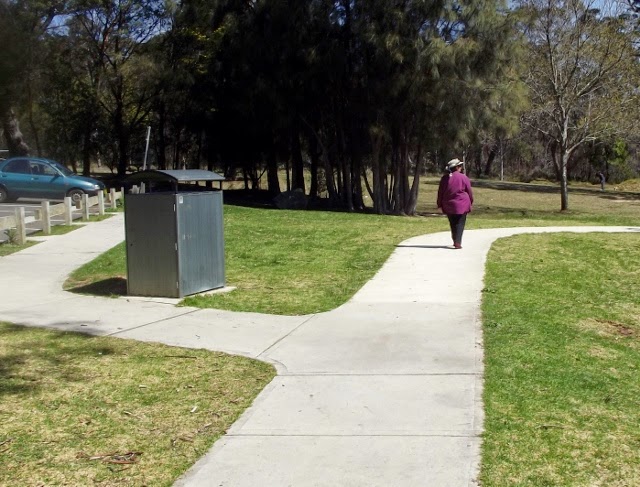 Eventually it was decided that only the creek at Wentworth Falls could supply the volume of water for the rapidly expanding rail network. The large dam, backing up into what we know as Wentworth Falls Lake, was completed in the early years of the twentieth century and supplied water by a pipeline to watering points as far down the mountains as Valley Heights. This sufficed until electrification and dieselisation made steam engines practically redundant on the Blue Mountains by 1960. 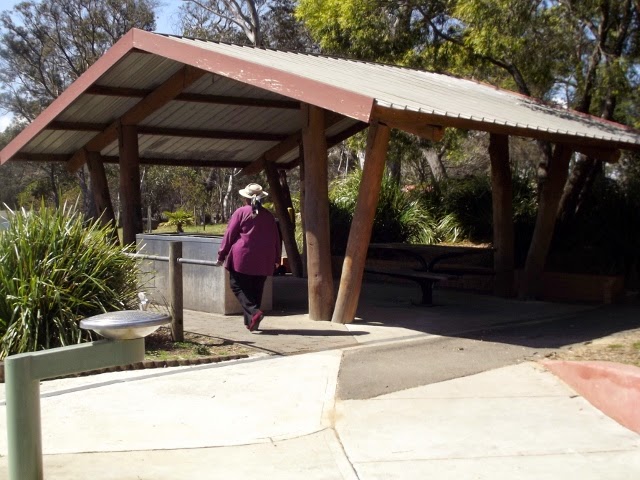 The development of the dam as a recreation area happened over many years. It was too good a resource to go to waste and it has become the most diverse and extensive recreation area in the Blue Mountains City. Now you can have a picnic (with barbecue), enjoy the two children’s play areas, fish from the shore or the dam wall and appreciate the many water birds as you walk around the shores of the lake. Swimming isn’t recommended, however, as it is difficult to guarantee water quality when there are residential areas in the catchment. One improvement would be a new, centrally located toilet block, but the same could be said for other popular destinations in the upper Blue Mountains. 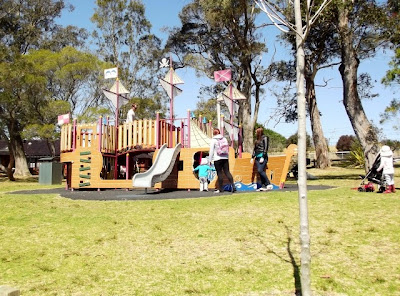 Posted by Geology and Blue Mountains Walks at 21:23 No comments: