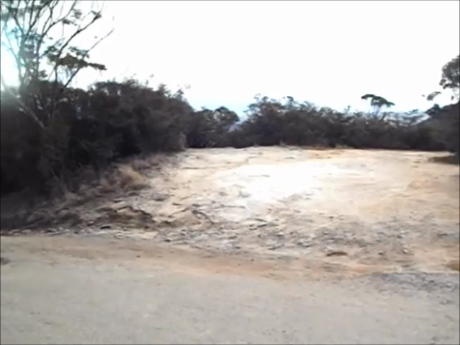 Near the lowest point on Glenraphael Drive, a well-made road leads off to the right. Vehicles won’t get far along it, however, as there is a locked gate at the first bend. See my video on Narrow Neck lookouts for more information.
The road leads down to a Sydney Water pumping station at the cliff edge. This is an historic spot, because in this vicinity workers from the oil shale mines in the Megalong Valley below once had a series of ladders to get up the cliffs at a point where they are at their lowest. More recently ladders were built here when the pipeline was constructed from the Fish River Dam. I can remember climbing them several times in the 1960’s. Since then, the top and bottom ladders have been removed to discourage climbers from using them.
It is not with ladders or the pipeline that we are concerned here, rather with the road itself which has long been known locally as “O’Sullivan’s Folly”. The fact that the cliffs were lower here, and the presence of the miner’s route to Katoomba, gave root to the idea that it might be possible to construct a road at this point into the Megalong Valley. As you look at the cliffs you might wonder how the road was to be built from where it now ends down to the valley floor. 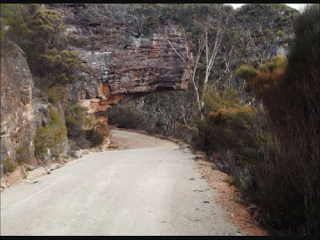 Jesus told the story of a man who began to build a tower, but left it unfinished when he ran out of money (and thereby made himself look foolish). So it was with this road.

Edward William O’Sullivan was born in Launceston, Tasmania, in 1846 of Irish Catholic parents. He eventually settled in NSW where he became a successful journalist and printer. He strongly supported the fledgling Labor Party of the day and by all reports was an honest, hard-working man. Having been elected to the NSW parliament in 1885 as the representative for Queanbeyan, he soon became one of its most prominent members. In 1899, as Secretary for Public Works, he approved the expenditure of funds for the construction of a road from Katoomba into the Megalong Valley via the approximate route of the then existing miners’ ladders. 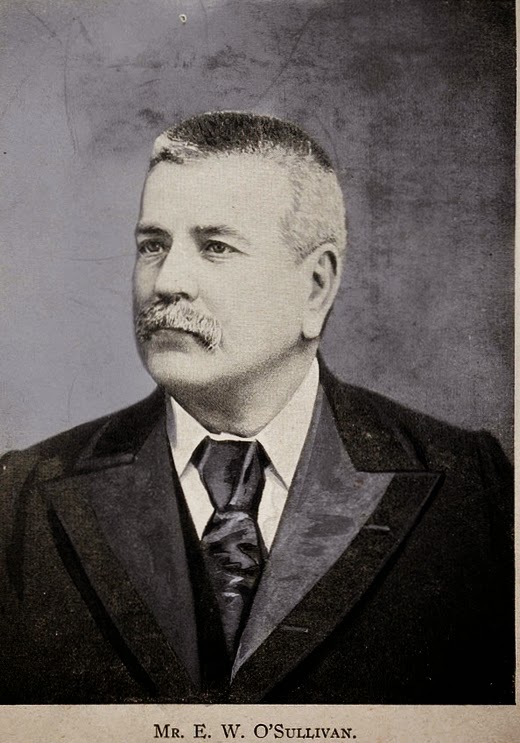 The money ran out long before the road could be completed (if it ever could have been) and jokers began calling it “O’Sullivan’s Folly”, which, of course they still do. It doesn’t ring true to O’Sullivan’s character to waste public money that way. He would have been thinking of the jobs the project created and the benefit to the residents of the valley below. Perhaps he was just given bad advice by Katoomba residents who should have known better.
You may read more on this interesting piece of Blue Mountains history by downloading this document from the NSW Department of Environment.
My interest in EW O’Sullivan goes back more than 30 years to the time I found several bottles underneath an old house. Much the most interesting was a Codd or marble bottle from the town of Queanbeyan, bearing the inscription “GN Morton Queanbeyan EWOS The Keystone” surrounding a picture of a man’s head. The portrait is, of course, none other than that of the subject of this blog. GN (George Nairn) Morton was a cordial maker in the town around 1900-1915.

But what did “The Keystone” mean? O’Sullivan died in 1910, and in the various newspaper reports of his life I discovered that he frequently referred to himself as “The Keystone of the Democratic Arch”. I now believe that Morton had this bottle designed to honour a man he greatly admired and that this probably happened soon after EWOS’s death. So it was that the soft drink bottles of Queanbeyan (and, as it turned out, those of the new Federal capital, Canberra) bore the likeness of a politician.
The design remained in use for perhaps 10 years, long enough, at least for the old-fashioned marble bottles to be replaced by new-fangled crown seals. These bottles are in great demand from collectors today. My specimen has been packed away for years and the photograph is one I extracted from an online auction catalogue. It wouldn’t surprise me to see it bring $1000 +, which isn’t far short of what O’Sullivan’s Folly cost to build.


https://johnsbluemountainsblog.blogspot.com/2013/12/links-to-all-blog-entries-and-relevant.html All Blue Mountains blogs and videos
https://johnsnewenglandminerals.blogspot.com/2013/12/list-of-all-blog-entries-to-date.html
All New England and other Geology blogs and videos
Posted by Geology and Blue Mountains Walks at 17:19 No comments: