LINKS TO ALL BLOG ENTRIES AND RELEVANT YOU TUBE VIDEOS 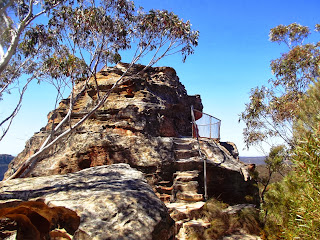 Anvil Rock is located on the edge of the Grose River gorge, about 7 km north of Blackheath. Access is via Hat Hill Road to the Blue Mountains National Park; the road and track to the Rock are clearly signposted.


Anvil Rock was named because of its shape by the then Blackheath Municipal Council in 1938 when the present road was constructed. Ten years later, the steel anvil which is now attached to the top of the rock was first put in place. You can read the story of how this was done, how it was lost for more than 30 years and how it was reattached in 2008 here . 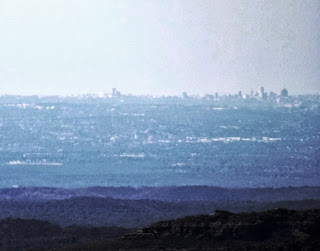 The walk from the car park takes less than 15 minutes and there are great views of the Grose River gorge both from the track and from Anvil Rock itself. The day I was last there was clear and fine and it was easy to zoom in and photograph the high rise buildings in the centre of Sydney. 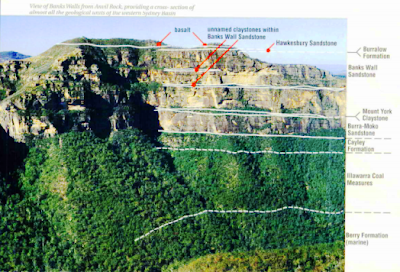 The views from Anvil Rock are superb, and the centrepiece is Mt Banks, which lies immediately opposite. The annotated photo below comes from “Layers of Time: The Blue Mountains and Their Geology” (DIGS reference GS1998/519). See the Blog entry on “DOWNLOADING PDF DOCUMENTS FROM DIGS”. You can readily identify the main strata, from the basalt cap down through the Triassic and into the Permian below. This is one of the best places in the Blue Mountains to see such a stratigraphic column of the Sydney Basin sedimentary rocks.


For the Wild Walks description of the Anvil Rock walk click here .


Here is a link to a 1950’s photo of the rock by celebrated photographer Frank Hurley  and to a You Tube video taken from the summit here .


My own Anvil Rock video may be found here . My You Tube playlist may be found (here)playlists - on gem hunting/mining, Glen Innes and New Zealand. Please comment and subscribe. 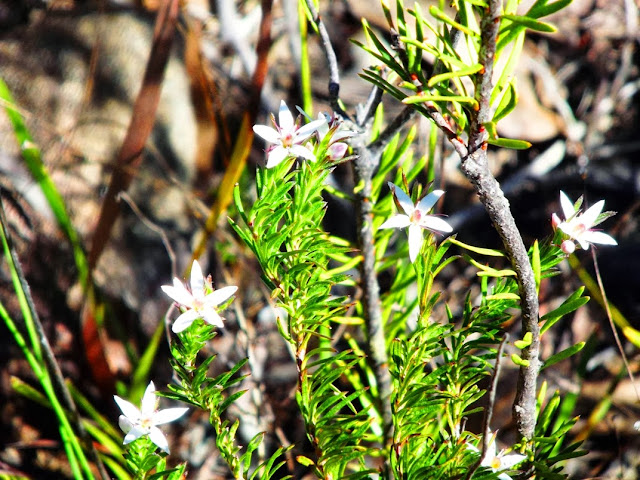 Posted by Geology and Blue Mountains Walks at 18:51 No comments:

The waterfall we now know as Wentworth Falls may well have been sighted during the first European crossing of the Blue Mountains in 1813. The expedition had been following the ridge dividing the streams flowing north into the Grose River and those flowing south into the Nepean River (Glenbrook Creek, Bedford Creek etc). Their route brought them out onto the edge of King’s Tableland, south of the present day township of Wentworth Falls, forcing them to deviate to the north to get around the cliffs of what we now call the Jamison Valley.


Whether George Evans or William Cox saw the falls (1813-1815) I have been unable to establish, but as Governor Lachlan Macquarie’s party was taken out in 1815 to see the falls and the valley we must assume that they were already known by then. Macquarie named the falls “Campbell’s Cataract”, after his secretary John Thomas Campbell, who was actually his wife Elizabeth’s brother. The name “Jamison Valley” (various spellings) dates from this time, also “Prince Regent’s Glen” and “King’s Tableland”.
Despite Governor Brisbane renaming the falls to “Bougainville Falls” in 1825 to honour the leader of a French scientific expedition at that time, the public began to use the name “Weatherboard Falls”, after Cox’s 1814 weatherboard store hut built on Jamison Creek, upstream of the falls, and later the Weatherboard Inn, built 1826-29. Most travellers who could afford to stay at an inn stayed here, and many walked out to see the falls and the valley.


Charles Darwin recorded his visit in 1836 in his account of the voyage of the Beagle; he appears to have stayed at the Weatherboard Inn on his outward journey to Wallerawang and Bathurst and again on his return, walking to the falls on both occasions.
The name “Weatherboard Falls” began to be replaced by “Wentworth Falls” following the renaming of the railway station in 1879. The falls became the centrepiece of the reserve established there, formerly administered by a local trust, then by the Blue Mountains City Council and now by the National Parks and Wildlife Service. More will be said about this in a later blog entry.


Here are some useful sites you can visit. Firstly, from the Wild Walks site, covering the track to the top of the falls via Fletcher’s Lookout, then the Undercliff Track and finally the Princes Rock track here, here and here .


The photograph of Wentworth Falls in extreme flood in February 2013 comes from this article here.


Here are two interesting videos. The first shows the falls in flood here and the second in strong wind here.


Finally, my own You Tube site, which includes a video on a walk to the falls via Fletcher’s Lookout, returning via the Undercliff and Princes Rock tracks here . My Blue Mountains playlist is here . I have three other playlists - gem hunting/mining, Glen Innes and New Zealand.


The two paintings illustrated are on display in the National Gallery of Victoria, Melbourne.

Posted by Geology and Blue Mountains Walks at 03:42 No comments: 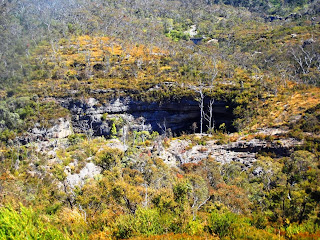 It’s a privilege to be able to visit this interesting spot in the Blue Mountains. For years access was not permitted because the place lies within the catchment area of Greave’s Creek Dam, which supplies water to towns within the Sydney Water region. In fact it is a short distance below another dam on the same creek. This explains the strict conditions imposed on those visiting the spot.


Quite apart from the beauty of the location, there is the added interest of the indigenous history of the Cave (actually a large sandstone overhang rather than a cave). You can read about this in “Blackheath Today From Yesterday” published by the Rotary Club of Blackheath, pages 143-144. If you can’t get hold of a copy of this fine book, go to this site   where you will find photographs by JC Merriman. Read especially the comments on geology and archaeology. 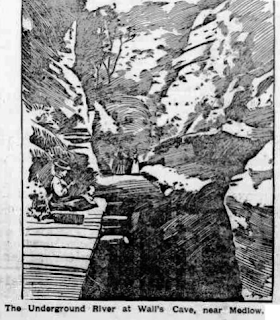 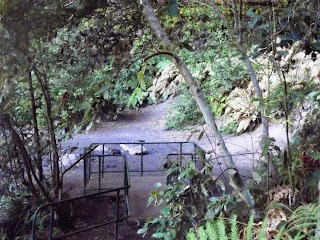 It would appear that the spot was discovered by a Mr Wall who actually owned the land at the time; this happened around 1892. As things turned out, access was easier from Medlow Bath in those days than from Blackheath, but today no other route is permitted than that specified by Sydney Water, which is to go to the end of Wall’s Cave Road Blackheath (off Evan’s Lookout Road) and then stay on the track down to the creek, returning the same way.  The image on the right is from the Evening News (Sydney) 21 December 1901 (courtesy of Trove).     I can remember visiting the place several times between 1950 and 1970, but whether we were there legally or not I don’t know. My uncle owned property nearby in the 50’s so we would have started from there.


I’m sure you will enjoy a visit to this special place. Allow an hour or so and obey all signage.


View my Blue Mountains videos on my YouTube site here . This includes a video on the Wall’s Cave and the Underground River, found here . I have three other playlists - on gem hunting/geology, Glen Innes and New Zealand. 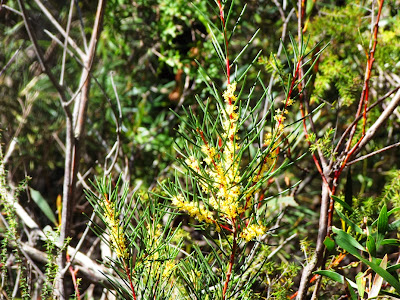 Posted by Geology and Blue Mountains Walks at 20:33 No comments: 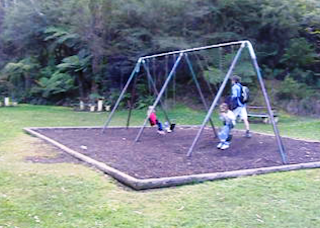 This has been a favourite place for picnics since the Katoomba Baths were opened here in 1913. Before then, many people came down the tracks from both Katoomba and Leura stations to visit the Leura Cascades and Leura Falls, especially after the opening of the Federal Pass track earlier in the century. The completion of the baths, with associated change rooms, toilets and picnic areas brought many more visitors. The area remains popular today, with easy access from the Cliff Drive and regular stops by the coaches which visit the principal tourist spots. 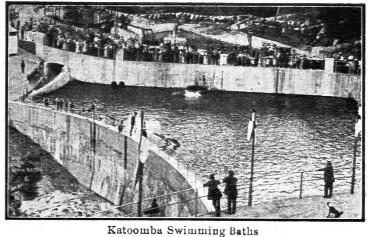 Just when the baths finally closed I have not been able to discover. The present Katoomba Aquatic Centre dates from 1972, but for at least 20 years before that the pool at nearby Catalina Park was drawing people away from this cold mountain swimming pool. The basic structure of the baths is still visible, having been filled in while the concrete walls were retained, which adds considerably to the interest of the place. Click here for a story about the pool.  .
There isn’t a great deal of parking and the lower area tends to fill up early in the day as people head off on the various bushwalks which radiate from here. The upper area isn’t far away, but it’s all up hill from the main facilities which is a bit off-putting if you’ve parked there and carried all your picnic gear down the hill.


The Prince Henry Cliff Walk, The Leura Cascades, The Bridal Veil Falls, the Amphitheatre walk and the Federal Pass are all easily accessed from here. 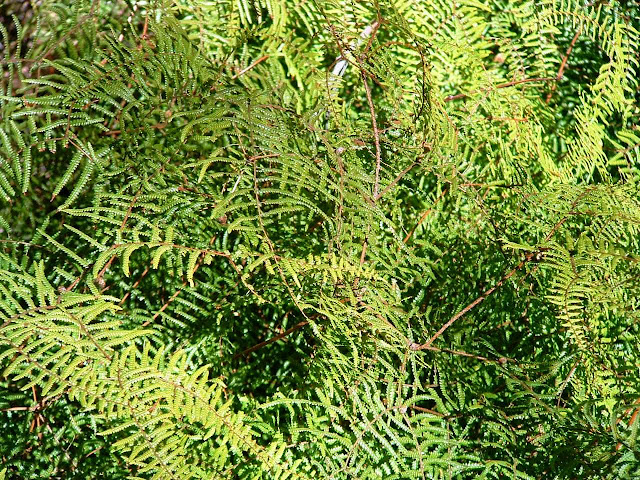 Posted by Geology and Blue Mountains Walks at 03:58 No comments:

Hat Hill Road at Blackheath leads out to several places where there are superb views over the valley of the Grose River and its tributaries. Among these is Perry’s Lookdown, a popular place with visitors since the 1880’s. There are three identified lookouts – Perry’s Lookdown itself, Docker’s Lookout and what has become known as Monument Lookout. Beyond the third lookout the track descends steeply into the valley, providing access to the Blue Gum Forest and the walking tracks which radiate from it. 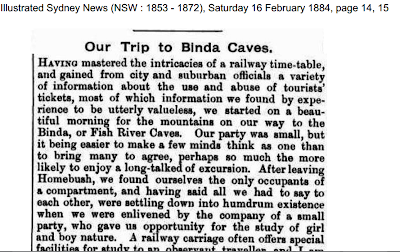 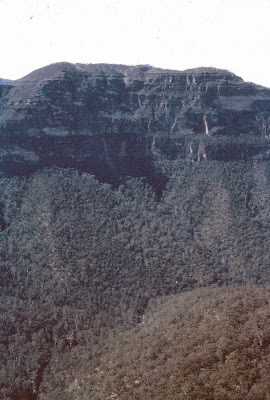 Immediately opposite the main lookout is the dramatic Mt Banks, so named by George Caley in November 1804 in honour of his patron, Sir Joseph Banks, when his attempt to cross the Blue Mountains came to an end on the brink of those cliffs. See this reference here for more information about Caley’s expedition. The mountain is capped by a small area of basalt which has somewhat fortuitously preserved a remnant of the Hawkesbury Sandstone and a complete section of the underlying Narrabeen Group sediments of the Sydney Basin. 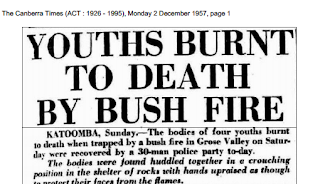 The National Parks and Wildlife Service has provided a rather scarce facility in the form of a small overnight camping area which is particularly useful for those doing the longer walks.


View my Blue Mountains videos on my YouTube site here . This includes a video on the lookouts at Perry’s Lookdown here . I have three other playlists - on gem hunting/mining, Glen Innes and New Zealand. 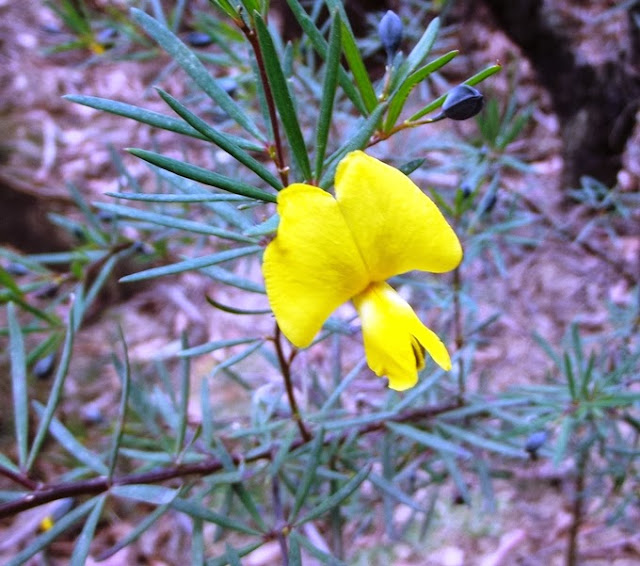 Posted by Geology and Blue Mountains Walks at 00:23 No comments: